This article originally published on InsNerds.com. Note from Tony: For years I have tried to find balance between the insurance talent crisis and the Coming Robopocalypse of Knowledge Jobs, Brian answers the question brilliantly!

Robots in factories, autonomous vehicles (AV) on the road, artificial intelligence in insurance – jobs that once helped build the middle class are in danger of extinction.  As I typed the headline, my wife peered over my shoulder and saw the title.  She asked, “Who is Al and why is he going to take your job?”  I explained it was an uppercase “I” and not a lowercase “L.”  I am sure I have a leg up on Al, but AI…not so sure yet.

Whether you are a near-retirement baby boomer or newly minted Generation Z employee, you are in competition for work with an unprecedented rival for that next promotion or new job.  And though historically, Americans were concerned about jobs being outsourced to foreign laborers, the new fear is that technology, robots, and artificial intelligence will perform tasks once solely the responsibility of people.  Insurance Journal recently posted an article arguing that 4.1 million driving jobs were at stake due to AV.  Comparable articles discussing other industries warn of a similar fate.  For example, 3.4 million cashier jobs are at stake due to innovations in cashier-less stores such as Amazon Go. 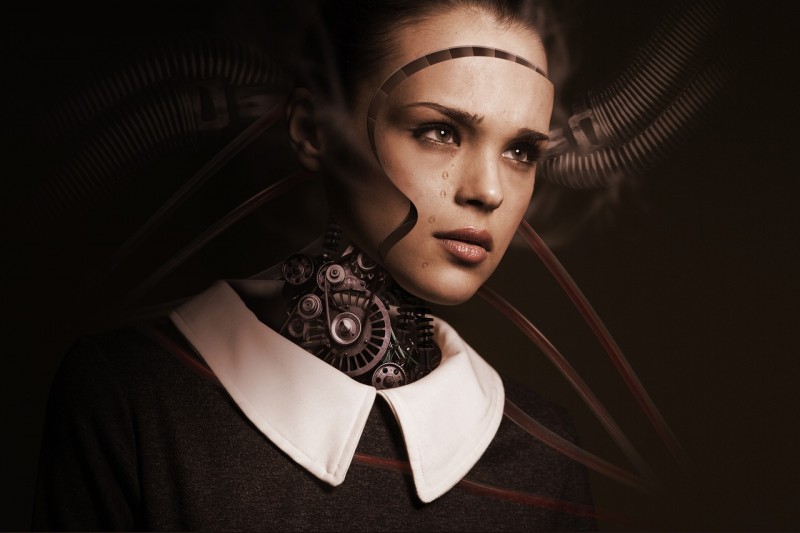 Insurance employs approximately 2.5 million people within the United States.  I tend to think in P&C terms, but I made sure to find a figure that included our friends in life and health as well.  There are companies that single-handedly employee tens-of-thousands to hundreds-of-thousands of people – State Farm (70,000), Nationwide (34,000), MetLife (66,000) and United Healthcare (230,000).  Of course, there are jobs in there that are not necessarily insurance related – i.e. HR, finance, etc. – but you get the point.

According to the Bureau of Labor Statistics (BLS), there are 315,000 claims adjuster, examiner, and appraiser jobs in the U.S.  Other large job classes include 103,000 underwriters and 466,000 insurance agents.  And other smaller professions that fill in other parts of the industry such as the 24,000 actuaries who are actively employed.  It is difficult to carve out figures like customer service representatives in insurance from the total population which the BLS estimates at 2.5 million.  But we know thousands of those jobs exist in insurance as well (By the way, BLS projects 10% growth in that sector).

The business of insurance is a main ingredient in the recipe for capitalism.  It provides immeasurable protections for commercial and personal needs alike; and therefore, the industry and its employees are constantly in demand.  Mix in the estimate that 400,000 jobs will be opening due to a retiring class of baby boomers, and you’ve got the ultimate formula for an industry with high job security and potential for growth.  But the question is will all of that matter if technology and AI displaces the needs for humans within insurance industry roles?

Zeroing in what actual jobs artificial intelligence may replace yields a variety jobs at this point.  There is substantial talk about underwriting, claims, and agent jobs being replaced by automation.  Interestingly though, a McKinsey research study found that many functions of these jobs were –in fact – not automatable. 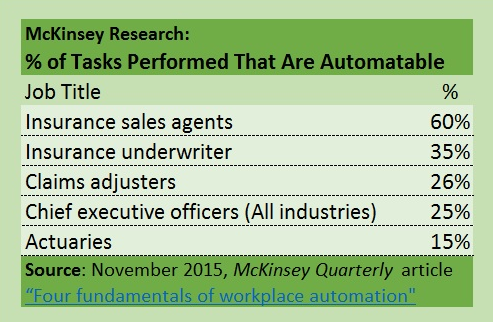 I agree in most part with their study, and because I work in consulting myself, I know there are a multitude of opportunities to automate certain tasks and use technology to drive efficiencies in insurance processes.  However, the idea that an entire job can be replaced, at least in this stage of the game, is unrealistic.  No robots are driving to a body shop to peek under the chassis to see what damage occurred from hitting a speed bump at 50 miles per hour.  Nor is one out in the field as a loss control consultant conducting air inspections and helping me sit up straight.  Jobs that require mobility seem to be safer than the average desk job.

From another perspective, AI also has not been able to absorb all the current claim scenarios that could potentially play out within its caseload.  Certainly machine learning will facilitate some of that knowledge, but claims are like snowflakes – no two are exactly alike.  The competencies of claims examiners, to know when to take certain actions, what questions to ask, and developing claim litigation or resolution strategies are built not only on learning through experience, but also common sense.  While some jobs are not in immediate jeopardy, there could still be those that are lost to AI due to the simple, repetitive tasks that are involved.

The World Economic Forum published a report, The Future of Jobs,” in 2016 which indicated 7.1 million worldwide were in jeopardy over the next 5 years.  However, 2.1 million new jobs would be created in more specialized areas.  So breaking this number down through the following equation – let’s see 7.1 million jobs divided by 3 billion people employed worldwide, multiplied by percentage of insurance jobs, carry the 2 – let’s just say the number of US based insurance jobs at risk is insignificant.

Now, it is undeniable that AI is going to develop some real traction in parts of our business.  Fukoku Mutual Life Insurance recently made headlines for terminating 30 employees which it replaced with IBM’s Watson to calculate payout to policyholders.  The company anticipates productivity will increase by 30%.  In a similar action, Dai-Ichi Life Insurance implemented a Watson-based system to assess payments (they did not terminate any staff). But again, Fukoku’s decision resulted in a non-earth-shattering loss of 30 jobs, not 30,000.

Here in the US, peer-to-peer insurer Lemonade has also touted it AI capabilities.  They have a bot named Jim to handle claims rather than an adjuster to process small, rudimentary losses. In December 2016, Lemonade’s bot Jim paid a claim in 3 seconds.  Within that time Jim reviewed the claim, checked the policy language, ran 18 separate anti-fraud algorithms, and then approved and paid.  Not bad for a “new-hire.”

I certainly believe there are opportunities to enhance, or eventually to replace some jobs, but this will likely not fully develop for another ten-plus years.  Will we no longer need to send investigators to sit in their car and wait 8 hours on the odd chance a claimant will leave their house and engage in activities not conforming to their alleged injuries?  Can a drone do this autonomously?  The fact is some jobs will be in danger.  National Bureau of Economic Research shows that between 1990 and 2007 that for every robot that was introduced into the workforce, it led to the elimination of 6.2 jobs. And for some perspective, Boston Consulting Group estimates that by 2025, robots across the globe will quadruple.  Whether these robots will replace cashiers, truck drivers, and insurance adjusters first is still unanswered.  There are likely other factors that will drive the needs for insurance jobs downward unrelated to technology including decreasing claims volumes due to pushes in workplace safety and advances in automobile system systems. 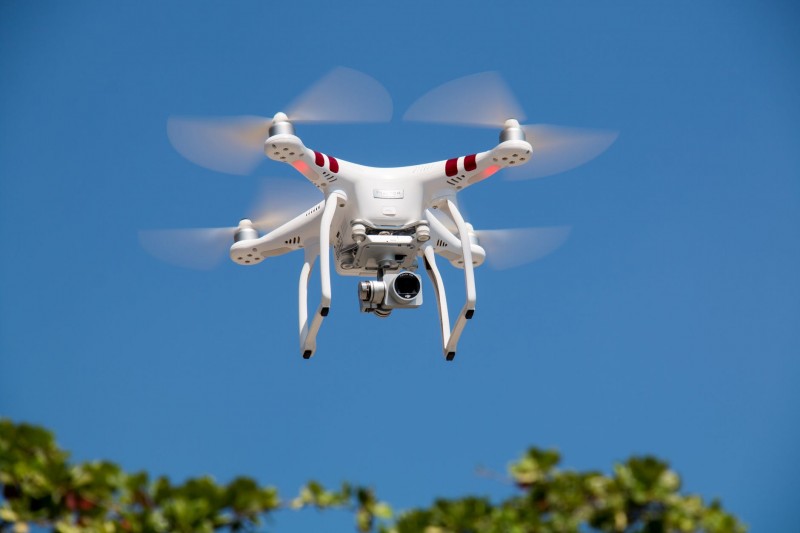 In the end, insurance will need people for a long time to come, though job responsibilities will evolve from the traditional claims adjuster, customer service rep, underwriter or field investigators as we know them now.  The industry will need to hire staff with degrees in computer science, engineering, and data science with strong analytical skills and high-tech capabilities.  We will still need people, just perhaps with some new skill sets.  But for some jobs, a human may always be required.  While maybe I don’t need to speak with a human when I need to file a claim on my windshield replacement, I certainly would like the comfort of speaking to another human should I injure myself at work, or my family is misplaced from our home due to a flood who can offer some understanding and empathy.  Some of those elements just can’t be authentically replicated.