Iran or Persia? Both are the same!

It is somewhere in the Middle East and surprisingly it has a funny Insurance Ecosystem.

But Our focus story begins from around 2003 in which due to some regulation changes, by government and parliament, which allowed the private sector to apply for establishing banks, financial institutes, and Insurance companies.

The game looked to be changing, after almost 68 years of government monopoly in insurance industry history in Iran.

Nevertheless, State insurers even if their stocks sold in Tehran Stock Exchange still were the bosses of the market cause the biggest shareholders on the board were still the government representatives.

In fact, Insurance remained a mistress for coming and going governments but the private insurers coming out of the ashes started to rise.

The birth of private insurers also affected the sale network of insurance in Iran in which consisted of three legal sale channels:

But the descent of Insurtech since almost three years ago triggered a rival between the above-mentioned channels and the alien Insurtechs!

First, it was started by agents and brokers while insurers were watching the battlefield with amazement and passively. Agents were demonstrating street protests in front of government-owned bodies; Central Insurance of Iran building or in financial events throughout the country and asking for restricting the role of Insurtechs, which were mostly the comparison sites.

They were slowly growing and providing more and more web-based or mobile application-based services like issuing the policies online.

The threat was real for old channels.

Yet, other Insurtech players working on IoT, HealthTech, Telematics, AI, Blockchain, etc.were absent from the Scene.

On the insurer’s side, as if most of the portfolio still went to government-owned insurers but private insurers also were trying to grasp parts of the market, which were less in their government competitor’s radar, like passenger, health and life insurance portfolios.

Not to forget that Since 2003, the private insurers were copying the old-fashioned governmental insurance companies marketing and sales processes, the same pattern was true for their claim processes.

Nevertheless, Insurtechs had started to blow wind into the changing insurance ecosystem or as I call it; paradise.

The first newcomers were aggregators, which in the first phase started to give consultation services and then price comparison and afterward they started to issue online policies.

Suddenly there was a flood starting to shape.

Indeed, the other hectares of paradise were not cultivated until the accelerators began to step in. Finally, a complete Insurtech ecosystem was gaining strength to grow according to changing customer and market needs.

They brought the many and other kinds of supports for growing insurtech startups.

The role that aggregators played in almost one or two years attracted the VC’s and private insurance companies to find the famous apple of the insurtech paradise: The digital Customer attraction.

However, there was a big problem yet:

The Culture (not to mention the paradise’s Lucifer; i.e. the restricting and decades-old regulations).

Both in the demand and the supply side of the insurance ecosystem.

Insurers excluding the high-ranking managers did not possess qualified human resources to deal or better to say communicate with Insurtechs. It is a real problem in Insurtech and the broad Ecosystem of Iran insurance that must yet be solved by hard works and of course mutual tendency from both sides.

The Insurtechs look for the fund but the insurers (even the private ones) do not take them seriously as if they are talking about risks and claims management processes 100 hundred years from now!

The insurers do not see the coming flood from both the customers’ lifestyle that changes their buying behavior and the agility of Insurtechs in answering the pre-mentioned demand by customers.

Therefore, we have a number of problems in this paradise, not to mention the Lucifer i.e. the governmental regulations:

2-    unqualified human resources who are not well equipped enough scientifically and culturally for the new era: Insurtech era.

3-    Lack of funds and international networking due to political and financial Sanctions makes the Iranian Insurtechs have just one choice:

The Iranian VC’s and few accelerators ran by some private insurers and universities and businesses in which are not that much more powerful regarding the funds to be allocated.

Before discussing the parashot way of getting rid of the problems, let’s take a look at a demographic view of insurance ecosystem of Iran or our Paradise residents: 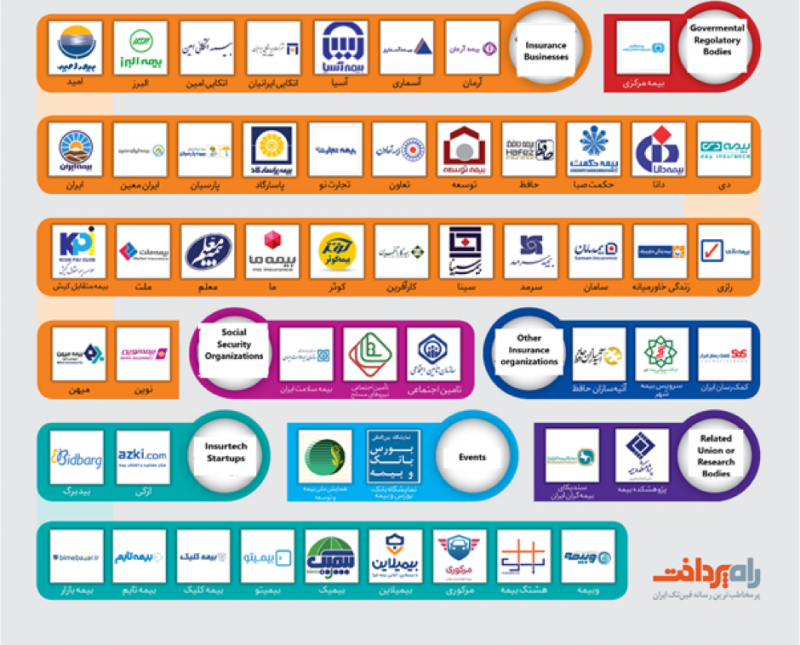 As you see the ecosystem is still small in size and number adding that according to the yearly statistics book  published by Central Insurance of Iran, insurance penetration rate in Iran is 2.3% compared to the world average, which is 6.2%, but this number itself is better than many Sunni Islamic countries in which insurance is forbidden by Sharia Law.

The spread of both the Insurtech paradigm in the industry and the more opened eyes of some private insurers to the “inspiration and not threat of the Insurtechs” combined by slowly growing accelerators which are solely providing service to Insurtechs and not only FinTech’s, has opened the path to other functionalities of Insurtechs like;

All these subcategories are each in deep relation with some of known Insurtech technologies like IoT, Wearables, AI, Blockchain, telematics, micro insurance, social insurance, etc.

In the next episode I will talk about the most attractive parts of Insurtech for both insurers, customers, Insurtechs themselves and also ,more about the challenges and opportunities in Iran Market place and I promise to be more data-driven in speaking as if that’s a big problem in Iran to talk data-driven.

Head of Planning & Development in the Department  of sales channel Development at Saman Insurance Co.

Life Insurance
A promise that if someone dies their family (usually) will get paid a lot of money to help them out.
Auto Insurance
A promise to pay to fix your car if you hit something and to pay to fix the things and people you hit.
Application
A form you fill out with certain information when you want to buy insurance.
Mutual
An insurance company owned by all of the people who they have sold promises to.
Reinsurance
Insurance for insurance companies.
Insurer
A company who promised to pay for big things you break or lose if you pay them a little money before it happened.
Claim
Asking somebody else to pay when something breaks or is lost.
Insurance
Paying a company a little money for the promise they will pay a lot of money for things we break or lose without meaning to.