For over 100 years personal auto insurance has worked in roughly the same way. Policies are written for each vehicle protecting both the vehicle and the owner in case of accident, theft or other damage. This simple system has worked well because the world of transportation remained somewhat stable. Cars are mostly owned by specific people and driven mostly by themselves and their immediate family members. The biggest change in vehicle ownership has been the move from paying for a car cash to financing it through a bank or finance company. This wasn’t a radical change, only requiring insurance companies to add lien holders.

Now the future looks very different. Self-driving cars and the sharing economy will force insurance companies to rethink their role. Deloitte University Press predicts that that the changes will lead to a decrease in frequency, and eventually in the severity of auto related losses as cars get safer and safer. On the other hand, when repairs and replacements are needed they will be more expensive. Overall there will eventually be less vehicles on the road but they will be more likely to be owned by large commercial fleet operators rather than specific people. Driver-centric policies and per-use policies (as opposed to vehicle-centric and time-centric policies) will likely become more and more common as they will become a better fit for the new realities of centralized auto ownership and self-driving cars.

The transformation of car use is expected to proceed in four stages:

Deloitte expects that the revolution will move fastest in urban areas and eventually expand to densely populated suburbs and beyond and that these four states will co-exist in some mix or another for the next 10-15 years before Accessible Autonomy becomes the norm.

Each of these stages will require different insurance products summarized in this chart: 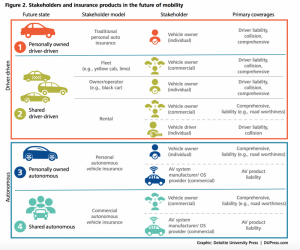 Self-driving cars will require a new type of liability coverage more akin to products liability than to traditional auto liability since the car is operated by the system designed by the manufacturer rather than by the owner who is now simply a passenger. Also, Deloitte expects that auto companies will manufacture only the hardware, but the operating system/software/artificial intelligence actually driving the car will probably be created by software companies separate from the auto manufacturer. This will further complicate how the products liability coverage will work. 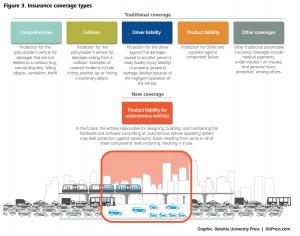 From Personal Lines to Commercial Lines

The progression through the four stages will probably result in more and more cars getting insured under commercial policies as less and less of them are personally owned, also as claims decline because cars are getting safer and accidents are happening less often the ultimate effect is predicted to be auto premiums being down 30% compared to today. This graph beautifully illustrates the process: 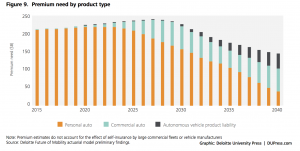 This article is largely based on Deloitte University Press report titled “The insurance industry’s role in the evolving transportation system”. Here we provide a summary and color commentary but if this a topic of interest to you we recommend you download and read the entire 28 page report. The report also includes numbers and charts prepared by their actuaries that better quantify the premium effects of these changes.

For insurance this means a change in product. A move from PL to CL and from Driver Liability, Coll and Comp to Product Liability.

Auto Insurance
A promise to pay to fix your car if you hit something and to pay to fix the things and people you hit.
Insured
The person who gets paid when something breaks or is lost.
Premium
The little bit of money that the company asks you to pay for the promise that they will pay a lot of money if you break or lose something covered by their promise.
Liability
When the law says you have to pay for breaking something.
Insurance
Paying a company a little money for the promise they will pay a lot of money for things we break or lose without meaning to.