I stumbled into the industry. My first brush with reinsurance came around 15 years ago, when I was asked to help with a new business proposal during my stint at a management consulting shop. I’d done some system implementation work on the primary market side, but reinsurance was largely foreign to me. We didn’t win the business, and I promptly forgot what little I knew about the industry…a process that really didn’t take long.

A few years later, I was working at that same firm, after having taken a break to start my own company. I’d moved over to a marketing role, though. After two years of market strategy work, I wanted to make a move. I heard about a writing role at a reinsurance intermediary—which I didn’t even realize was a thing. Upon getting the job, I immersed myself in all things reinsurance. If I was going to be writing about it, I wanted to wrap my head around what “insurance for insurance companies” means.

That’s where I wound up really falling in love with the reinsurance industry. I spent so much time and effort just learning and absorbing—drinking up everything I could about reinsurance rates, the Florida market, catastrophe bonds. You name it, I threw myself into it. Runoff? Yup. Insurance-linked securities (ILS)? Definitely. Industry loss warranties (ILWs)? I never thought I’d wind up running the group that puts out “the number” referenced by more than two-thirds of those reinsurance transactions!

I wound up hunting for more and more. I got hooked. Learning kept sucking me in.

Of course, it didn’t hurt that my first project dealt with what people called “the mortgage meltdown.” It was late 2007, and I got the assignment my third day on the job. Writing about such a timely issue (which would eventually become the biggest financial story in decades) for an intellectually charged team was intoxicating. So, by the end of my first week, I’d decided that I was going to stay with reinsurance for a while. Even when I took a break from the industry to sharpen my marketing skills, I still kept a foot in reinsurance.

And I’m glad I did. I came back to the industry only a few years later!

Today, my role in the industry is far different than I could have imagined a decade ago—let alone before that, when I was working on consulting proposals at 2:00 a.m. PCS® publishes insured loss estimates for catastrophes in the United States and Canada—the former for nearly 70 years. Since my taking the helm back in 2016, we’ve cemented our service offering in Turkey and launched our new specialty lines platform, which provides industry loss estimates for marine and energy, cyber, and terror events worldwide. While the new stuff is always exciting, it’s also been incredible to see our original service in action, addressing three hurricanes and six wildfires that all came in rapid succession.

Even with the active catastrophe year, the new global solutions, and a greater footprint in the ILS space, what really blows my hair back (what little I have left) is hearing something new in a meeting. That hint of what I get to explore next brings a bit of a thrill, and then I get to dig into something new. I gain another tool to help my clients. I generally get satisfaction just from chasing down some knowledge.

Yeah, I’m hooked. If you want to talk about this more, just give me a shout on Twitter (@tjohansmeyer). I could talk about this stuff all day long, but that conversation’s always better with a @catbondcat meme! 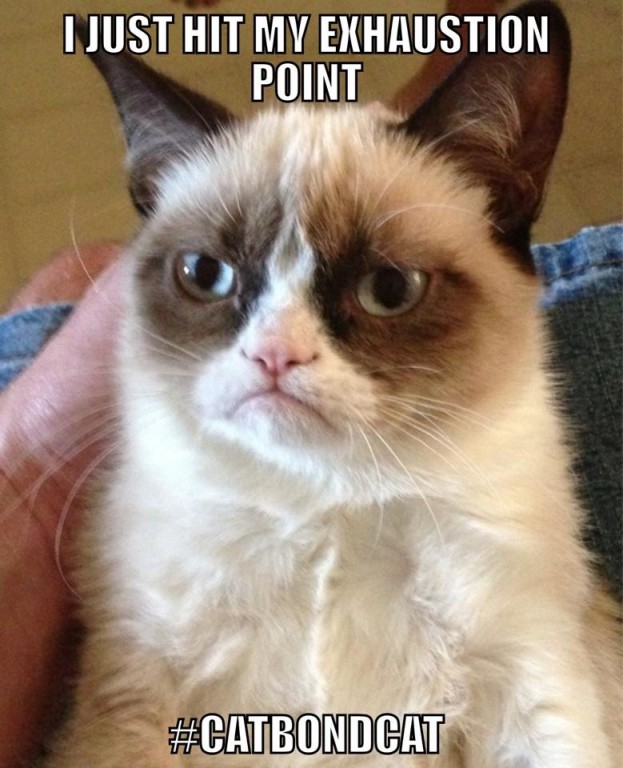 Catastrophe
Something very big breaking the houses and businesses of a lot of people at the same time.
Reinsurance
Insurance for insurance companies.
Insured
The person who gets paid when something breaks or is lost.
Insurance
Paying a company a little money for the promise they will pay a lot of money for things we break or lose without meaning to.