We’ve been working hard to catch up at our day jobs after being out for CPCU Hawaii, but we were also super excited to make the most of the free pass NAMIC gave us to Connect Differently to the Annual NAMIC Convention. Overall, we are very impressed! We have been wishing CPCU had an option to watch the sessions at the Annual Meeting and Leadership Summit remotely for as long as we’ve been involved, and it’s great to see that NAMIC is doing this. Also, every insurance pro attending the conference in person gets a pass to Connect Differently allowing them to re-watch any sessions they loved or to watch the sessions they couldn’t make because of conflicts in the schedule. We have also been very impressed with the video quality of the recorded sessions and a little sad we didn’t have the chance to watch live streaming, which was part of the offering. Awesome job, NAMIC!

As usual, the first few sessions we jumped in to watch are Millennial related sessions, and today, we are sharing a little bit of what we learned. For now, we have watched “The Future of Labor Supply”, Cam Marston’s Generations session during “Tuesday’s General Session” and the “Talent Gap” session. To mix it up a little, we also watched the”Emerging Technology and Board Responsibility” session, but we’ll blog about that one at a later article to keep this one from hitting book length!

The Future of Labor Supply:

We have seen many sessions about the different generations in the workforce and how they might affect the industry but this one was a standout in the sheer amount of data he brought to the table. The presenter extensively used charts to help us digest the deluge of data while also giving us a compare and contrast into both the US and Canada labor markets, a nice touch given that the conference was in Vancouver, BC, Canada. 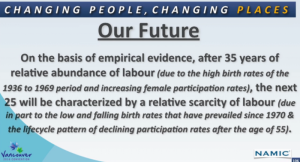 The session’s main point was that largely because of demographic changes the competition to fill roles will be much higher than it was in the past four decades. This is wonderful news for young insurance professionals, and we will use these numbers to continue attracting students and young professionals into our wonderful industry! 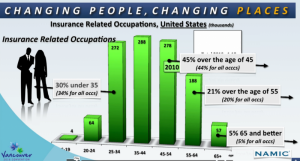 One surprising thing we learned is that people are working later and later in their lives, even if they’re moving from full time to part time or consulting. This is great news in that we will be retaining access to some of the very experienced Baby Boomers who are retiring, so we will be able to continue learning from them and picking their brain at least for a while longer.

The session also explained that the new generation’s desire for self-service options means personal lines agents will be less critical, and we will need more and more STEM graduates to help us design proper self-serve options that compete with what our customers find in their non-insurance transactions. Finally, he pushed on the importance of mentoring to help transfer the extensive knowledge the Boomers have picked up in their decades in the industry and getting it transferred to the Xers and Millennials.

As you’d expect for the General Session in a major conference, NAMIC had a name brand speaker who did an awesome job, but we were even more impressed that they brought a famous speaker on the generations, which is a topic we feel deserves that level of commitment rather than just being relegated to one of the educational sessions. Tony is a big fan of Mr. Marston and borrows heavily from his ideas on his own session about Millennials in the Insurance Industry and was very excited to see a full session by him, since before he had only watched many of his short videos on YouTube.

Every generation’s way of seeing life and work is colored by the historical context they grew up in. Mr. Marston explained how 9/11 led the Baby Boomers, who raised most of the Millennnials, to become Helicopter Parents. Gen Xers, who raised some of the Millennials, reacted a bit differently and became Drone Parents: you don’t see them hovering above but, when necessary, they come down and create a firestorm to save their kids. This historical view of how the Millennials became the generation they are, is very interesting, and we will be building off of some of these ideas in the future in our presentations and articles!

He also explained how Canada, being a part of the British Crown, didn’t bring their troops home right after WWII the way the US did, meaning that their Baby Boom happened later than it did in the US, and was more of a trickle rather than all at the same time, so the Baby Boom in Canada was more distributed rather than concentrated in a few years.

We have known for a long time that Generation X is a population contraction, but we really didn’t know what caused it. Mr. Marston posited the interesting but unproven hypothesis that the availability of the contraceptive pill in the 1960s led to this generation being 25% smaller than the Baby Boomers. This gives us a possible answer to a question we have had for a long time!

Boomers were told to “go find a  job.” A couple of decades later Boomers told their Millennial children to “find a job that makes you happy”. That last part made a big difference in how Millennials see their jobs and their expectations when they get to your company. They expect your job to make them happy! Unfortunately the workplace was never designed to make employees happy. . .

Mr. Marston gives some very interesting historical background on how as societies move from poor to rich, kids are raised with an individualistic “what’s in it for me” attitude.

This article is already at 1,100 words so we’ll have to talk further about Marston’s great ideas in a future article! One key point he shared was 5 places to find non-traditional employees who may not fit into the generational norms:

This session hosted by two women from Munich Re had some interesting perspectives and data on the generations and how the demographic changes we’re seeing in the industry are changing the industry.

We learned that the Property Casualty Insurance Industry has declined a little bit in its importance for the economy going from 3.6% of GDP in the 1950s to only 3.2% today. We had never seen any stats related to this and found it very interesting. 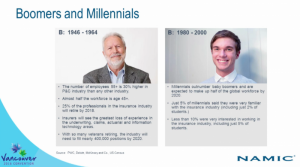 They also mentioned that four out of five insurers are already doing some sort of job automation. This is very interesting giving how outdated most of our technology is, but it does make sense given the state of technology today and how important it is given the trouble recruiting new talent and the huge numbers of people who are retiring. They showed updated numbers showing that 25-30% of the insurance workforce is retiring in the next 2 years! Is your organization ready for that!?!?! 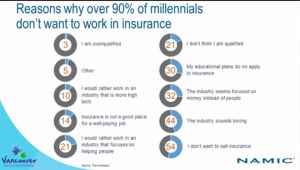 They talked about how terminology matters and some RMI programs are finding that the terms “Risk Management” attract students much better than “Insurance”. That means we have a LOT of rebranding to do! Finally, they also talked about how with the technology and automation we will need in the future, we will be recruiting a lot of STEM graduates which puts us in direct competition with other industries like banking, finance, technology, medicine and many others meaning we have to up our game when it comes to creating awesome benefits and work experiences for our employees. 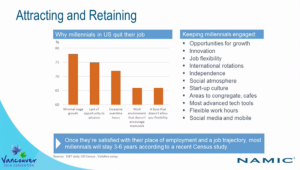 Overall, we’re really enjoying the sessions that NAMIC put together this year.  We will have more reviews and information in our coming articles.  If you attended in person or virtually, please share your thoughts with us! All the videos are available for 90 days and you can still buy access to Connect Differently (got some training budget you need to utilize before the end of the year? *hint hint*).

NAMIC offers an online only option for it's conferences called Connect Different. It's not perfect, but it's the only insurance conference we know that offers this, so good for them! They gave us a free pass this year in exchange for us blogging about it.

Future of Labor Supply: We are in a demographic crisis! The talent wars are only going to get worse. Learn to retain your Millennials.

General Session with Cam Marston: Affluent societies tell their kids they're special. Millennials grew up in a very affluent society. You need to get right with Millennials AND find other employees: Veterans, Oldest Children, From non-western nations, Farm kids, Cultures with rigorous shared right of passage rites like Mormons who have gone through two year missions abroad.

The Talent Gap: 25-30% of the insurance workforce is retiring in the next 2 years! Time to rebrand to better attract Millennials.

Risk Management
The way we study how things can go wrong and try to lower the chances that they will go wrong.
Risk
Chance of something changing either for better or worse.
Insurance
Paying a company a little money for the promise they will pay a lot of money for things we break or lose without meaning to.