There’s a good chance that if you follow Insurance Nerds’ career advice you’ll end up seeing significant career growth and sooner or later you’ll find yourself in a position that has you traveling a fair bit. Most insurance companies use a system (likely Concur or Egencia) to book corporate travel and they each have their own rules on which flights you can book, which flights you can’t, and which flights you have to get authorization from management to book.

If you simply choose the cheapest flight that makes sense for your particular trip, you’ll fly lots of different airlines, rack up a frequent flier few miles in each and you won’t get advantage of the benefits you could take advantage of if you committed to one airline. Chances are your company’s booking system allows you to choose any flight that’s within $100 to $200 of the “cheapest logical fare”. If you commit to a single airline you might pay an extra $50 or $80 on any given flight, but over time it’ll be worth it both for you AND for your employer.

Personally, I am committed to Delta and fly nothing but Delta and its partners, so I will be using Delta for every example, but every other one of the major US airlines (Delta, American Airlines and United Airlines) has similar frequent flyer programs and pretty much everything I’ll talk about exists in some version with whichever airline you commit to.

It’s the Right Thing to do For Your Company

While it is true that at times they’ll be paying a few extra bucks to keep you on your airlines of choice ultimately worrying about that would be penny wise and pound foolish. Ultimately your main responsibility to your company is to make it where they need you in time and to be effective once you get there. Having frequent flyer status doesn’t matter much on an average day (kind of like the classic Chubb as “who insures you doesn’t matter, until it does”), but it’s priceless when something goes wrong, which happens often in air travel! If you’re flying with an airline that you don’t have status with, and a flight is delayed or canceled for any reason, you’re probably going to have to stand in line with everyone else on the flight trying to get rebooked or you’ll stay hours on hold with their customer service line. When something goes wrong you’re VERY likely to miss your meeting, client visit, conference, training or whatever else you’re flying for.

On the other hand, if you have status the airline will bend over backwards to help you get where you’re going and to get you there on time. You’ll be able to speak to customer service in minutes instead of hours, and if you have high enough status they might even rebook you for free with another airline to get you to your must-attend meeting. Many of the other things you gain by having status with an airline are good for your company, but simply being able to get there ASAP when something goes wrong, is the key thing they’ll benefit from. 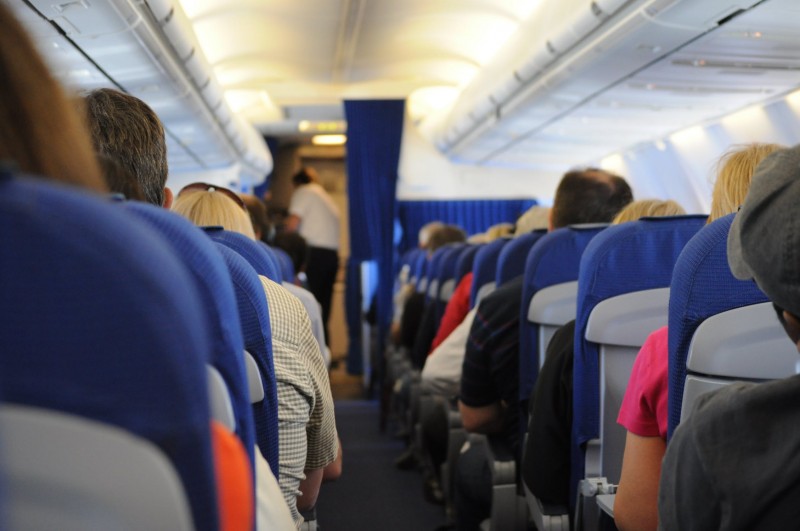 It’s AWESOME For You

For this section I’ll illustrate what travel is like for me as a Delta Platinum. There are multiple levels to every airline’s frequent flyer program and some of the benefits don’t kick in until the higher status levels, but this will serve as a good illustration.

When I book my ticket I immediately qualify for a free upgrade to Economy Comfort, unless it’s already booked up with people who paid the extra $50 to $150 for the seats, 99% of the time I can get it for free. In economy comfort I get a little extra leg room (which isn’t a big deal for myself since I’m 5’7, but it’s a big deal if you’re tall), I also get free drinks, better snacks and most importantly the Economy Comfort seats are closer to the front which mean I can get off the plane faster and make it less likely that I miss a tight connection.

I also immediately get a request entered in my name for a free upgrade to First Class. Depending on availability of First Class seats I might clear for one 5 days, 3 days or 1 day before the flight takes off. Even if I haven’t cleared for a First Class seat by 24 hours before the flight when I check into the flight, there’s always a chance I’ll get an upgrade last second. Ultimately in 2018 I’ve gotten upgrades on 29 out of the 49 flights I’ve taken this year, that’s an awesome 59% of the time! Your mileage will vary drastically depending on which status you have with the airline but I guarantee every first class upgrade is well worth the commitment, even if you get just a few a year. You’ll be much more productive on the flight, get better food (or food at all while coach gets nothing). You’ll be able to rest much better and have much better leg room than anywhere else on the plane. Be able to hang your suit jacket so you’ll look more put to together for your meetings and most importantly you’ll be seated at the very front of the plane so you’ll be able to deplane first and have a much better chance of making any tight connections.

One word of warning on First Class. None of the major US airlines provide free First Class upgrades on transatlantic flights, transpacific flights and on coast to coast flights that feature full laydown seats. They happen on occasion when you get crazy lucky, either because of a cancellation or delay, or because of am oversold flight where it’s cheaper for the airline to upgrade you to First Class than to move a bunch of people to another flight or there’s only a single flight per day. I’ve only have had it happen a handful of time: Atlanta to London; Paris to Detroit and both ways between Seattle and Beijing. Each of them has been absolutely incredible, but I’ve also flown to Europe several times, Dubai, Hong Kong, South Africa, Hong Kong, etc stuck in coach while there are open First Class seats because of the no upgrade policy…

I lived in Delta’s home base of Atlanta for 2 years, which was amazing because I had a direct flight almost anywhere in the world, but I’ve also been faithful to Delta while living in Ohio, California and Iowa which means I ALWAYS have a layover, and it’s still worth it. If you’re flying enough, it makes sense to get a credit card that gives you access to your airline’s lounge. Both myself and my girlfriend independently have the Amex Delta Reserve which costs a little under $500 a year, but gives us lounge access at any Delta Lounge, so whenever we have a layover we can wait in a comfortable space, with free food (the breakfast oatmeal is great, the mac and cheese is amazing and so is the tomato soup), more than enough plugs to keep our electronics charged and solid internet access. In Atlanta we even have a shower and in many lounges, we have quiet work areas and even a nap area. Every major airline offers a similar branded credit card offering these same benefits.

The most underrated benefit of having status is the ability to do free same-day confirmed flight changes and especially same-day standby. Basically, these allow me to book a specific confirmed flight and then take a different flight on the same day without paying a $200 change fee (or trying to convince my boss that having the company pay a change fee to get me home earlier makes sense). This allows me to always book the last flight of the day from wherever I’m flying from, so I’m not in a hurry to get back to the airport, and when I make it to the airport I call the Medallion Line, they answer within a few seconds, and I get on the standby list for the next flight home. This year I’m running 10 out of 10 on same-day attempts. Basically, 100% of the time I’ve gotten to the airport early enough to make an earlier flight I’ve gotten on, and usually with decent seats. This saves the company money, since the last flight of the day is generally cheaper, and it gets me home earlier whenever possible, all without ever being stressed about making it to the airport.

Finally, the oldest and most well understood advantage of sticking to a single airline is that you’ll build up frequent flyer miles, allowing you to take some trips for free, maybe even on first class if you save up enough miles. That’s a pretty awesome reward for all your business travel. Nothing feels like more of a vacation than one you took with free airfare! Also, once you develop some status you get more miles for each time you fly. As a Delta Platinum I get twice as many miles per trip and thus I get a free flight in half the time.

So how do you get status?

Each airline has different rule but basically you get status by flying enough miles (or enough segments). In most cases you get the first level of status by flying 25,000 miles in a year, the second level by flying 50,000, the third level by flying 75,000 and the much-vaulted highest level by flying 150,000. Chances are you’ll never hit Diamond (the highest level on Delta) but Silver and Gold are quite doable if you’re doing some business travel and some personal travel each year. Once you hit status for the year you start enjoying all of the benefits of that status for the rest of the year, and for all of the next year. Unfortunately, you do need to re-earn it each year and you can go down in status if you don’t fly enough in a specific year…

What else do you need to know?

I’ve covered all of the basics of the why and how of airline status, but there is a lot more to know on how to make the most of business travel, packing properly, choosing the right suitcase, why you should never check a bag and many other things that would make this article way too long. Instead I’ll point you to three awesome Manager Tools/Career Tools podcasts that cover this topic super in-depth and give you a lot more details:

Credit
A credit means you have to pay less money for your insurance because your stuff is in very good shape.
Policy
A written paper that explains in long words the promise you have bought from the company and what is covered or not covered.
Insurance
Paying a company a little money for the promise they will pay a lot of money for things we break or lose without meaning to.