A Deeper Dive into Medical Cost Rising for Lost-Time Claims

It is said, a picture is worth a thousand words, and I have ten pictures, courtesy of NCCI’s Barry Lipton’s presentation on that subject.

It was brought to my attention by my fellow blogger, James Moore, of J&L Risk Management Consultants. I met James back in February at the NCCI 2017 Data Education Program in West Palm Beach.

Mr. Lipton is the Senior Actuary and Practice Leader, and his presentation was called, “Medical Cost Trends Then and Now.”

Yesterday’s posts regarding the slight increase in the average medical costs for lost-time claims only scratched the surface of the subject. I hope this post will dive deeper into it, so that we can see the whole picture. 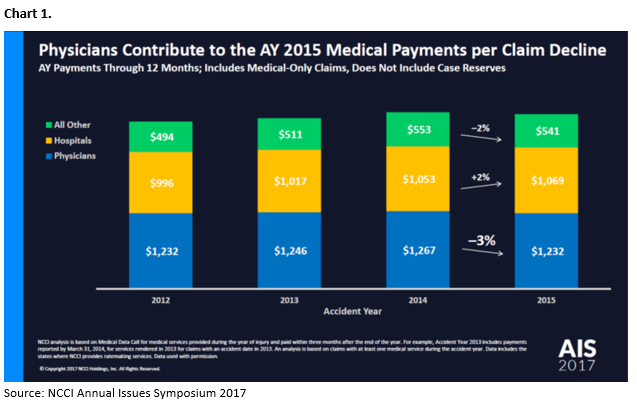 According to James, the main reason for the reduction in costs is the physician utilization per claim. Even though it is only a3% reduction, it is significant, James says, in a time of upward spiraling medical costs. Chart 2 bears this out. 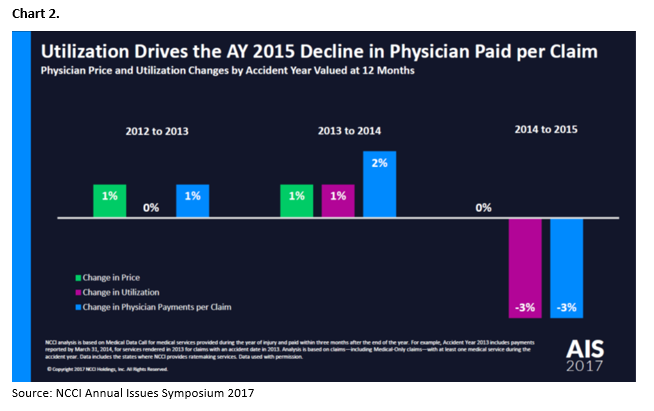 The second part of my post yesterday, “Slight Increase in Average Medical Costs for Lost-Time Claims, Part 2”, looked at the steady rise of the average medical cost for lost-time claim.

If we compare the chart from yesterday’s post to the one Mr. Lipton presented, we will see that his chart does show increases and decreases over time in the average medical costs per lost-time claim, but my chart indicates that ever since 1995, it has been rising steady.

Both charts, do show that the average medical cost per lost-time claim is hovering around $30,000, and if the numbers are consistent with ones for earlier years, represents almost 60% of the total claims cost. 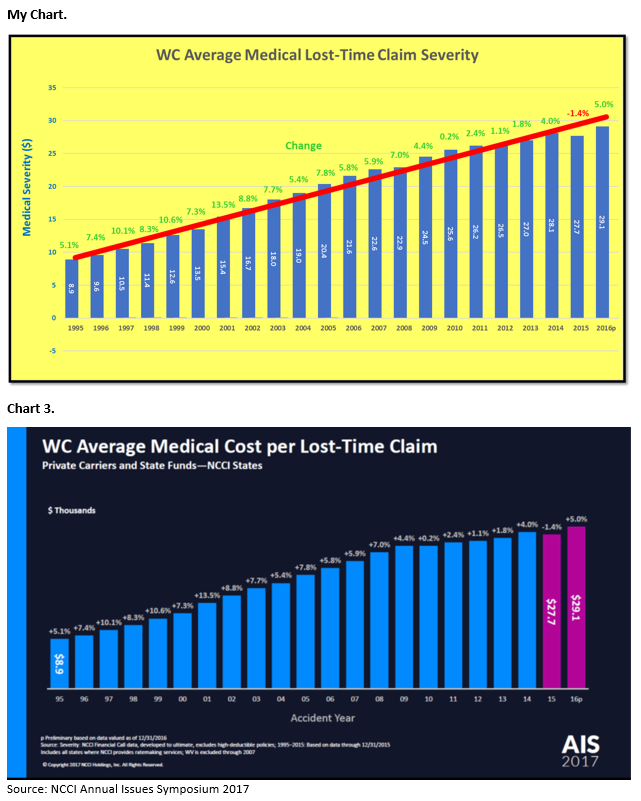 To examine this in greater detail, Mr. Lipton broke down the Accident Years into three separate periods and slides, to show the change in medical cost per lost-time claim. He compared the change in Personal Health Care (PHC) Spending per Capita with the Medical Cost per Lost-Time Claim. 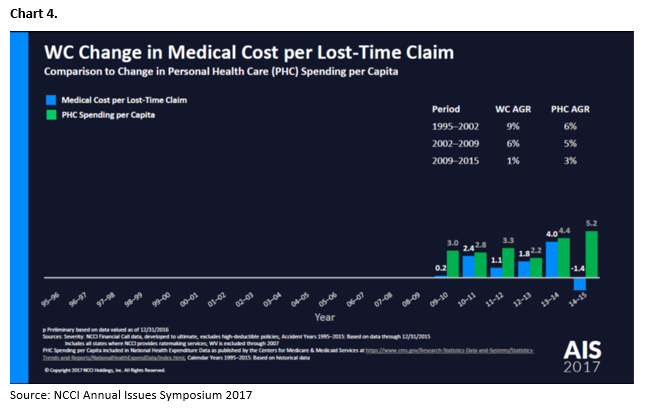 To understand what was driving the decline in Accident Year 2015, Mr. Lipton identified six different drivers, as indicated in chart 5. 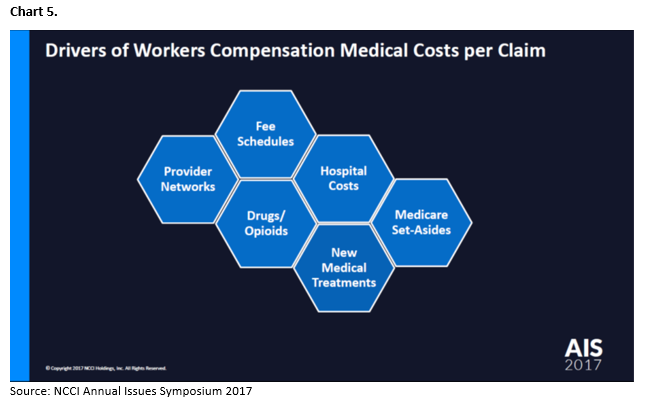 Finally, Mr. Lipton discussed how hospital costs contributed to medical cost per lost-time claims by highlighting the difference between inpatient and outpatient costs, which are rising. 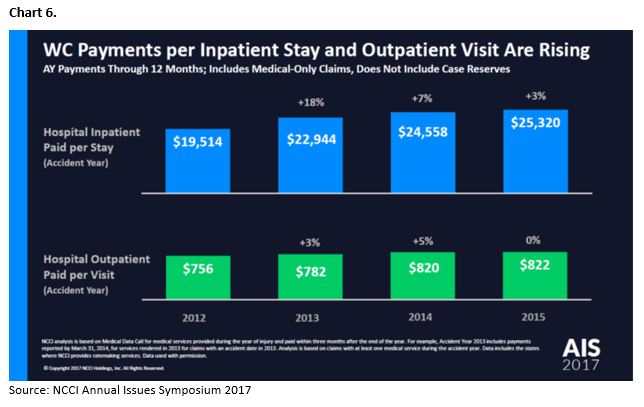 As for Hospital Outpatient Paid per Visit, the number are considerably lower for each year when compared to Inpatient Stays, but nonetheless have been rising.

So perhaps this, at the end is why the average medical cost per lost-time claim has been rising over a period of over twenty years, from 1995 to 2015.

I wrote to James last night when I saw his recent posts on this presentation, and he responded that we are both correct in our analysis, but looking at it from different points of view.

My conclusion after reading this presentation and my discussion with James suggests to me that there are two things going on here. One, when a worker is injured and receives medical care, unless and until he or she goes to a hospital, the best way to lower costs is through what James calls one of his six keys to reducing workers’ comp costs. One of those keys is medical control by the employer, which James said reduced cost by 75%.

But I also realized that when an injured worker goes to the ER or an Ambulatory Service Center as an Outpatient, has an Inpatient stay, that this is where the medical costs go up.

Naturally, Workers’ Comp medical spending is only a fraction of the overall health care spend of the US, and as costs for health care in general rise, so too does costs in workers’ comp.

So, while many have argued or shown that they can lower costs on the front end, from time of injury to return to work for most claims where no surgery is required, one of the largest reasons for the steady rise in the average medical cost per lost-time claims is hospital costs.

On this, both James and I agree. However, it is important that many in the industry see this as well. Keep thinking that it will change by doing this or that has not worked, the numbers prove that. Maybe it is time for something out of the box.

Richard has over 20 years of insurance experienced focused on on worker's compensation.

WC (Worker's Compensation)
A promise to pay for your doctor and hospital if you get sick because of your job.
Actuary
The person at a company that uses computers to help the company decide how much money to sell their promises for.
Risk Management
The way we study how things can go wrong and try to lower the chances that they will go wrong.
Claim
Asking somebody else to pay when something breaks or is lost.
Risk
Chance of something changing either for better or worse.
Insurance
Paying a company a little money for the promise they will pay a lot of money for things we break or lose without meaning to.