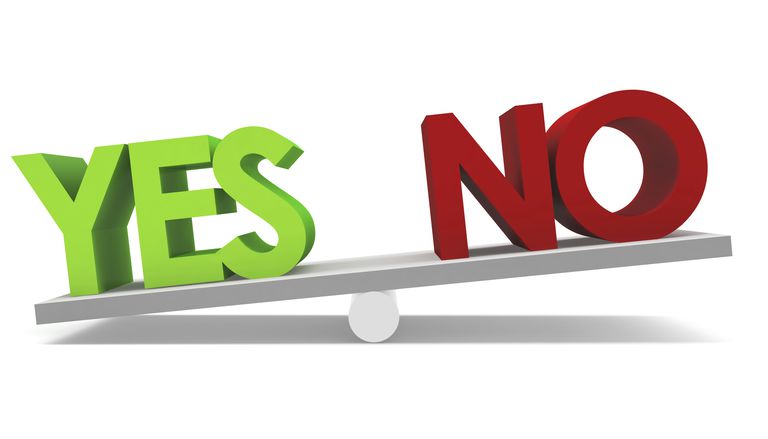 If you were to ask me about the first piece of sales advice I ever heard, I’d probably say “Don’t take ‘no’ for an answer”.  I’m not even sure where I first heard it. It may have been on a show or just a piece of advice you pick up along the way. I’ve certainly never heard it since I’ve been in insurance sales, and haven’t passed it along myself.

The advice seems simple.  Under the “sales is a numbers game”-mantra that is drilled into us is an underlying current that every single lead is vital, making us believe that all leads are created equal.  This is simply not the case. By spending too much time on one individual lead, we may not be contacting another lead that is more likely to buy. Or (even worse), we may miss a deadline or expectation that we have set with a more likely to buy prospect.

[…]making us believe that all leads are created equal. This is simply no the case.

Where “sales is a numbers game” comes into play is in the idea that we need to be more efficient in our process.  We know that we are not going to sell 100% of our leads, so why the push to do so? If sales is a numbers game, then we should be as focused on the amount of time that we spend per lead as we are on the total number of leads that we generate or our quote, conversion and close rates.

At Agency Performance Partners, a major component of our AppX Sales training program is making sure that salespeople are effective AND efficient.  The “don’t take no for an answer” mantra creates an environment that hurts both effectiveness and efficiency.  By spending too much time with a client that is not interested in buying from us, we may miss a sale, thus hurting effectiveness.  We also increase our time spent per client which can dramatically hurt efficiency.

Instead of “don’t take NO for an answer”, I recommend “don’t take MAYBE for an answer”.  When working with a prospect, you should focus on driving them to a decision. Obviously, we are responding to objections and hitting our follow-ups in a way that is most likely to drive a “yes” decision.  However, we need to be able to identify the difference between an excuse and a reason. We should look at reasons as “no’s”. If someone states that they are not interested in buying from us and gives us a legitimate reason, accepting that it’s time to move on allows us to focus on other prospects.  When a client gives us an excuse (waiting for other quotes, wants to check with their partner, etc.), we are allowing them to keep us on the hook with a “maybe”. We need to drive them to a decision even if that decision is no. For example, when someone tells me that they need to check with their partner, I will ask one of two questions:

1)     If this decision was yours alone, would we be moving forward OR

2)     When you speak with your partner, are you going to suggest that you move forward with us.

By putting these questions to the prospect, we identify whether the objection they are presenting to us is a legitimate reason or just an excuse.  Typically, when asked these questions, you’ll either get a positive or negative response that will tell you if it’s still a viable lead, or it will lead to other questions which gives you the opportunity to overcome the real reason why they are hesitating.

By not taking MAYBE for an answer, we can move leads back into a viable/inviable status instead of an unknown one.  By doing this and then focusing our efforts only on the viable prospects, we eliminate wasting time and money on inviable or unknown status prospects.

Keeping in mind that “no” actually means “not right now” also allows us to identify the reason that we lost the deal, which is valuable information when we got back after it in the future.  Finally, because our industry is unique in that we rely on renewals and referrals to be effective, pushing a “no” to a “yes” will invariably create a customer that will not provide referrals and will most likely move on at the first renewal.

Dave's career in the insurance field began in 1999 as a customer service representative for Plymouth Rock Assurance in Boston. Siekman has held his Massachusetts Property & Casualty Producers license since 2005. In 2013, he was a finalist for the NetVu Automation Excellence award. He's now a Performance Specialist at Agency Performance Partners.

Agency
The company the agent works for.
License (Insurance License)
A paper that allows a person to sell insurance.
Insurance
Paying a company a little money for the promise they will pay a lot of money for things we break or lose without meaning to.